An expert in the field of nutrition, Richard has spent most of his life delving into the wisdom of the body and merging it with science to learn and apply what works best for optimum health.

Richard Helfrich has successfully worked with many clients who have suffered from Lyme Disease, most notably, Yolanda Foster, star of the Real Housewives of Beverly Hills. For the first time ever, Richard has made his Lyme Disease Protocol for the treatment of Lyme Disease infection, available to the public.

Richard has created his own supplement formulas, which aid in killing the three species of bacteria belonging to the genus Borrelia associated with Lyme Disease. This specifically formulated trio of products includes his Cognitive Restore formula, which aims to restore brain function, or ‘brain fog’ as a result of parasites nesting in the brain.

Borrelia burgdorferi (Bb) is the bacteria associated with Lyme disease. It’s different subtypes of Borrelia, which cause illness in humans, such as B.afzelii and B.garinii (see Borrelia Fact sheet).

Lyme disease is notoriously difficult to diagnose using conventional tests. And there’s great variation in the presentation of the disease as well, depending on where you contracted it, and whether or not you have any other coexisting infections. There is a group of seven or eight microbes that are the most common. The worst ones are Babesia microti and the different forms of Bartonella.

“Underneath that, there’s often an infection with Mycoplasma. We still don’t know if it’s really transferred with the same bite or if the people had it all along and become symptomatic when the immune system is suppressed by the spirochetes,” according to Dr. Klinghardt, a well known physician for his successful treatment of neurological illness and chronic pain with Integrative Medicine.

Other than the co-infections, there is what I call the “opportunistic infections.” The combined effect of the initial infection is an immune suppressive effect, and then the patient becomes vulnerable to all sorts of other things. The most common things people contract early on in the course if the illness are different forms of parasites, such as protozoa; Babesia itself being one of them.

Other Bacterial Parasite examples include:

Two big guns in addressing the bacteria are the Parasite1 and 2 formula’s available on this site. Parasite 1, addressing along with the Lyme related Borrelia Burgdorferi bacteria also address the 30 different parasites that inhabit the body on any given day.

Among other chemicals, wormwood also contains Thujon, a potent toxin/vermicide and antibiotic. Cloves (laung) developed strong protection for its flower buds. No other herb is as potent an egg vermicide as cloves. These three herbs have been highly appreciated throughout history. They can get rid of multiple stains of bacteria and over 30 types of parasites in our bodies, without causing any headache, nausea and do not contraindicate any other medicinal interactions.

Black walnut hull and wormwood kill the adult and development stage of the parasites. Cloves kill the eggs. If you kill only the adults (flukes), the eggs will soon grow into new adults. If you kill only the eggs, the hundred stages of adult flukes already in your body will soon grow into adults and make more eggs. The three herbs combined together form the most effective single treatment.

This particular formula took eight years to get right, to have a therapeutic dose that reduced what began as 20 to 30 capsules of each component reduced down to a tincture that half a stopper full delivered the equivalent therapeutic dose. Parasite Formula 2, is the other adjunctive therapy that works in combination with the Parasite 1. Formula 2 works to effectively kill over 800 bacterial and viral strains, 100 strains of fungus, and a large number of single and multi-celled parasites. It also demonstrates a “wide spectrum of activity,” including antiviral, antimycotic, and antiprotozoan capacities against many bacteria and viruses, including E.Coli.

Together these two formulas are the one two punch against Lymes and all other parasite activity that create a tremendous drain on immune resources. (see article on Grapefruit Seed Extract)

This formula helps address the results of Lyme disease and it’s effect on the brain. A neurologic syndrome called Lyme encephalopathy is associated with subtle cognitive problems, such as difficulties with concentration and short-term memory.

In Lyme encephalopathy, diffuse white matter pathology can disrupt grey matter connections, and could account for deficits in attention, memory, visuospatial ability, complex cognition, and emotional status. Lyme Neuroborreliosis is a spirochete infection in the brain that can leave one with severe brain impairment and neurological issues. Cognitive Restore provides the brain with the nutrient support that will enhance and restore brain function.

The brain is one of the three cells in the body that does not replicate, as such it has to have an amazing ability to repair itself, since it has to out live all the replicating cells. The brain is 80% fat which is why the spirochete love to hide there were they can evade the immune system and antibiotics.

Cognitive Restore works to increase acetylcholine levels in the brain increasing neurotransmitter activity and restoring the axon of neurons that conducts electrical impulses away from the neuron’s cell body. In the brain it is responsible for creating the synapse that is used for the transmission of signals for skeletal muscles and movement. It also increases Vasopressin the learning chemical of the brain that regulates the ability to form nerve cell connections to develop new memories but also enhance short term memory. One of it’s side benefits is the ability to dissolve amyloid plaque in the brain, the plaque associated with Alzheimer’s disease and dementia.It also helps to increase oxygen to the brain and energy (glucose) utilization.

"A truly amazing book that covers it all."

The 24 Hour Body
by Richard Helfrich

The 24 Hour Body is an owner’s manual to the body. This book answers the important question: What are the daily nutrient needs of the body? 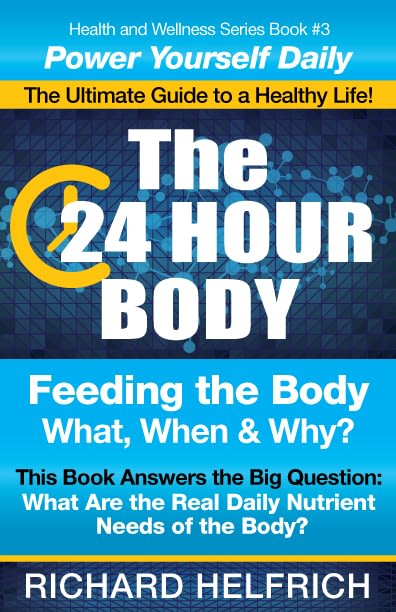